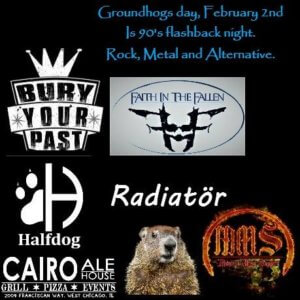 The new year is upon us faithful and the first FITF show of 2018 on February 2nd will be at Cairo Ale House.    It’s going to be a funny night as we celebrate Ground Hog Day with Midwest Music Support at Flashback 90’s Night!  What does that mean?…it means 90’s theme all night long with retro gaming, background music in between sets (certified 90s backgro

und music mind you) and the Groundhog Day movie playing on one of the TVs.    But it’s really about featuring some origal local Chicago rock, alternative and metal bands, who will also sprinkile some 90’s covers into the mix.   You’ll get Faith in the Fallen, joined by:

It’s our first time rocking Cairo Ale House, so come join us for a great time and support local music!    We also hear someone may be celebrating a birthday that night…..ooooooohhhhhh.  Intriguing.

Working on confirming the final lineup now, but it’s going to definitely be Faith in the Fallen, Blackmarket Democracy, and Praise the Fallen.  Just waiting to confirm one more and we’ll get the final deets posted!

Working on it!  But you can expect FITF acoustic in the next couple of months.

I know I’m like a broken record, but the details to come!  But we’re talking details around supporting the annual fundraiser for the 100 Club of Chicago.  More info to come!

We’ve been telling you about our new music.  We’re still close to being on schedule with finishing in January, but we had to return to Electrowerks Studio to add a couple flourishes to Darkest Days, but we can definitely say…ALL TRACKING DONE!  We expect to finish soon!

Gravity EP – Available Online or at a Show!

Pick up a T-Shirt  or signature FITF jewelry at our merch table.

Support and share the Make Way and Gravity Lyric Videos!

Hope to see you all soon!  Thank you for your support.